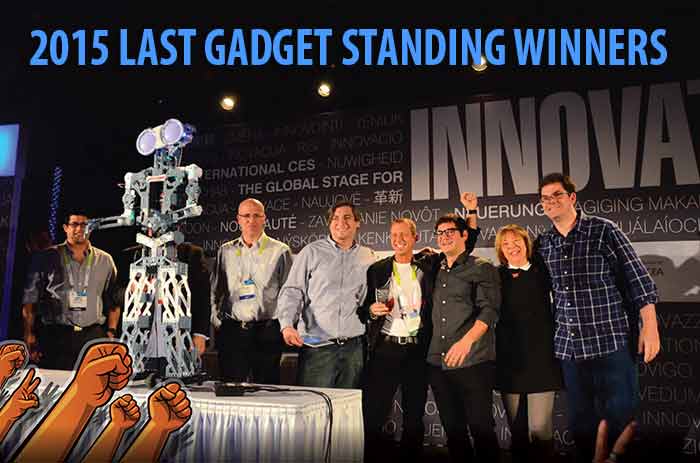 Every year for the past 14 years, Thursday has been Last Gadget Day at CES. The Last Gadget begins months before CES starts, as contestants who believe that they’ve got what it takes to make a lasting difference in the history of the technology industry, sign up to show their stuff. For months, the audience votes online, but on the third day of the show the contestants go head to head in a live competition, which has elements of the high school play meets a high tech production.

Our moderator, the irreplaceable, irresistible Jon Hein, has the audience in stitches assuring them that all contestants are winners in their own right. Trivia breaks where he uses a Las Vegas showgirl to dole out swag to the audience has become a hallmark of the event.

Online there was a clear winner. SCiO from Consumer Physics. At the live event SCiO was like watching a physics magic show. The SCiO is a handheld molecular scanner that uses mass spectroscopy — shooting light at an object to determine its composition.

The team beamed the SCiO at various items including cheese, Advil, and soda. Examing the cheese, they could determine its caloric value. With a pill, they could identify it as Advil, and also differentiate between a gel and a normal version. With twin cups of Coke and Pepsi, they could identify which was which, but sadly failed to resolve which tasted better. The team is amassing a huge database of the characteristics of physical things so that the SCiO repertoire will continue to grow.

On stage the winning demo came from Mecanoid, a programmable four foot tall robot from the toy company, SpinMaster. SpinMaster purchased the rights to Meccano (the European name for what we Americans call Erector Set). The Meccano robot can be programmed either using an iPad to trace intended movement or with a mimicing feature called that allows the creator to record their own voice, move Meccano’s limbs and create a little playback routine. Meccano features simple computer vision and can change shapes from humanoid to trex and others as kids build. The product will available this spring and was unveiled at CES. On stage Meccano delighted users by shouting hello and telling jokes

Other clever products and skits:

RestOn, a sleep tracker that you place under sheets focused on the “non-wearable” attractiveness of their device. A blow up bed set up on stage was able to record the breath and sleep pattern of the live subject.

Singtrix, a karoke machine extraordinaire, created by the same folks who brought you Guitar Hero, gave a rousing rendition of Queen’s Bohemian Rhapsody switching between a traditional microphone and the specially endowed Singtrix microphone that can let everyone sing in tune. The secret sauce is natural pitch correction. Easy come, easy go.

The V.Alrt bracelet stole the hearts of those who have been taking care of the elderly. This attractive, unobtrusive button talks to a smartphone via Bluetooth. It can track the whereabouts of a senior and also has an alert button in case of a fall. You can also get notified if the wearer wanders off. The only limitation we saw was that the older person needs to have a Bluetooth enabled phone within communications distance, still a bit of a rarity in this population.

We loved the Ring Door Bell because for the first time, using the special bell and your smart phone you can see who’s at the door without answering it, and even talk to people at your door whether you’re at home, in the office or out on a date. This ability to monitor your visitors is at minimum convenient and at best a life saver. The crowds loved it.

PetZilla is not the only pet treat dispenser on the market but everyone knows you get teary eyed watching a demo about videoconferencing with your pets. Not only can you have a chat with them, a treat gets dispensed at the end of the session. Equal parts Skinneria and adorable, talking to your pet remotely and dispensing a treat remotely is love at first bark.

Lenovo YOGA Tablet 2 with AnyPen technology.is a Windows 8 tablet, but the real eye popping technology is that you can write on the surface of the tablet with everything from your fork to a pen to a stylus, without damaging the screen. With this tablet, truly anything is a pen.

Ekocycle from 3D Systems got the audience focused on ecological use of materials. Designed with the help of will.i.am, this 3D printer can print using material from post-consumer waste (plastic bottles) to create objects – from cool iPad cases to amazing suit jackets. Now that’s recycling.

Other notables that didn’t make the finals but had a great deal of interest from judges and the online crowd included Fugoo’s new, super sized waterproof speakers. 3D Systems iSense which turns your iPad into a 3D body scanner, SplitSecnd, which retrofits older cars with crash detection, route mapping and an emergency service. And DropBake, a digital scale and app that ensures perfect baking. Intrigued, check out all of the contestant on http://lastgadgetsanding.com.

Enjoy the videos and congrats to all ten finalists — each indicative of the future.

NextGEN gallery is not installed/inactive!